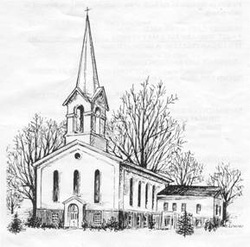 Our church history began in October 1850 with a group of families, led by Austin Spencer, who separated from the Ogden Center Presbyterian Church (which had converted from a Congregational church in 1835). The first church building was dedicated in February 1852. The pro-tem minister, Rev. Horace Grannis, served until April 1852, when Rev. James Horton Dill became our first pastor. He died in service as a chaplain in the Civil War. This first building burned to the ground in November 1852 and the present building was dedicated in September, 1853. The steeple bell, damaged in the fire, was recast into the bell now hanging in the belfry.The stained glass windows, installed in 1896, were renovated for the 2000 celebration with donations from Clark Kunes' estate as well as other church family members. The parsonage was built in 1903. In 1909 the present day organ was purchased, with the carillon added in the 1960's. The Christian Education building was completed in 1953, with the Youth Chapel being constructed in the 1960's. In 1964, the elevator was added. Through the years floor plans were rearranged (e.g., the choir loft was moved from the east to west end of the sanctuary) and improvements have been made (e.g., recent purchase of a new kitchen stove). Regular maintenance has been lovingly attended to through the hard work of the church family and gracious bequests, often with volunteered time and funds in hand, and sometimes by moving ahead on faith. Our church history is much more than a building, however.

One of the primary tenets of Congregationalism is the congregation's responsibility and ownership of the spiritual path (as well as the buildings) of the church. A significant change in that path occurred in 1958 when the church voted to join the United Church of Christ (UCC). In 1974, by vote of the church, women began serving communion. And in 1992, a Mission Statement was created for the church "May we be motivated by yesterday, sustained for today, and empowered for tomorrow." Of course, always an important part of the church's spiritual growth has been the development of the church education program for youth. Over the years the education program and youth fellowship program have changed with the changes in the church family. In the late 1800's, there existed the Junior Endeavor Young People's Society of Christian Endeavor. In the 1950's and 1960's, there were several youth fellowship groups and in the 1970's there was a youth drama group (a child of the Men's Club musical shows of the 1950's perhaps).

Another part of the church's spiritual path has been its participation in the community and mission work. Over the years this has taken many forms: the Pastor's Discretionary Fund, created in the 1950's, for those in need seeking assistance from the church, offering space to community organizations (including a public kindergarten), helping at the Salem soup kitchen, contributions to organizations like the Peace Corps, and helping an RIT foreign exchange student, as well as the ongoing work of the Board of Christian Action.

The musical life of this church has always played an important role. The choir no longer requires congregation members to practice with them for one hour in order to sing at church on Sunday (a custom in 1863), but there have been many other opportunities for members of all ages to "sing a joyful noise". Over the years you could sing in Cherub, Junior, or Senior Choir, or ring bells in the Senior or Junior Bell Choir.

Through the years the spiritual and social fellowship enjoyed by our church family has been displayed in many ways: the Ladies Benevolent Society of the early 1900's and the Women's Guild of the later 20th and early 21st century, the Men's Club and Couples Club of the 1950's, and Friends and Lovers formed in the 1960's. Our congregation has also enjoyed the many church picnics, Lenten suppers, musical shows, youth retreats, women's retreats, Mug & Muffin, and Christmas pageant family nights. The decades were different, the centuries were different, but the sharing of faith has changed only in form, not substance.
This history of our church is a summary and compilation of the centennial history published in 1950, and history chapters written by the Sesquicentennial History Committee: Dorothy Creech, Ruth and Len Gartland, and Ray Spencer. Our thanks for their hard work.